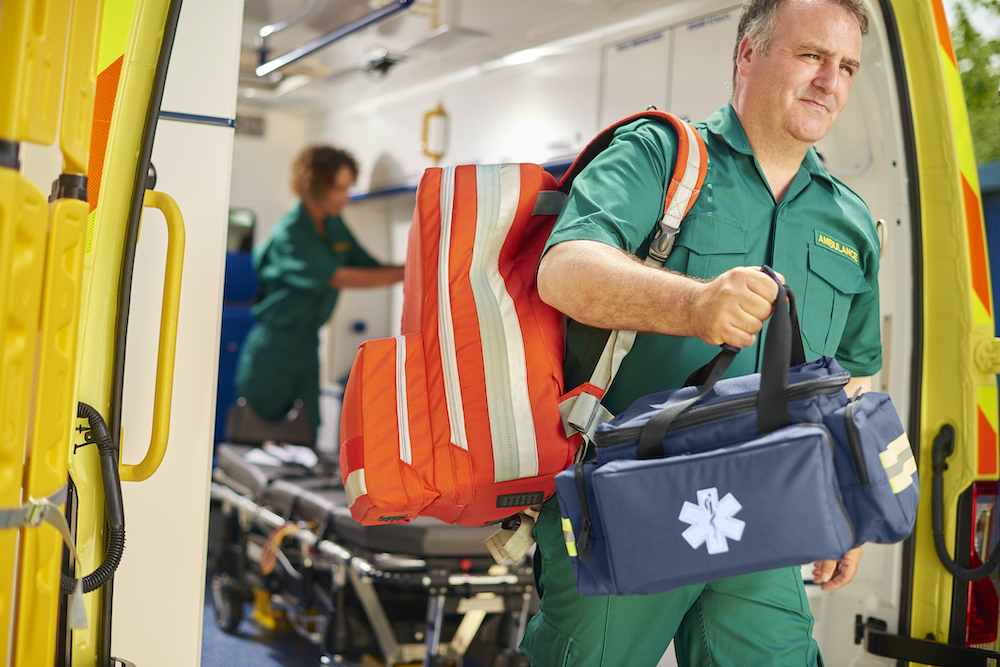 The East of England Stroke Telemedicine Partnership has been delivering consultant expertise to the bedside of stroke patients for a decade. HT World reports on its learnings and successes at a time when healthcare teams across the world are looking for guidance in telemedicine.

The Covid-19 pandemic has raised the profile of telemedicine in the NHS; but the idea of using technology for the remote triage, treatment and support of patients is far from new.

The East of England Stroke Telemedicine Stakeholder Partnership has been delivering a successful thrombolysis service for patients with acute ischaemic stroke for a decade.

Video conferencing technology supplied by Visionable has enabled the consultants on its rota to interact with hospital base teams and patients.

Lynda Sibson, the partnership’s telemedicine manager, says: “A cart is taken to the patient’s bedside, so the stroke consultant can talk to the stroke nurse and to the patient, and see their CT scan, and decide whether to thrombolyse [administer ‘clot busting’ drugs].

“Many projects that are called telemedicine give a clinician a data feed or access to the scan; but that is not telemedicine. Being able to see the patient really matters.”

Covering an area of 7,500 square miles and 5.6 million people

The partnership works with seven hospitals that serve a largely rural area. It was set up in 2010 after a review found the region was struggling to meet national target times for delivering thrombolysis to patients with acute ischaemic stroke (AIS).

Thrombolysis drugs, which dissolve the blood clots that form in the arteries feeding the brain, need to be given quickly, but only to the right patients. This decision is taken carefully by specialist stroke consultant, after going through detailed clinical information.

So, patients need to be assessed before treatment. In the East of England, long travel times meant it was not possible to transfer patients who arrived at their local hospital to another hospital on a hub-and-spoke model.

Yet a shortage of stroke physicians made it impractical to offer a 24-hour consultant service at every hospital. So, a decision was made to use digital technology to support a rota of skilled stroke consultants, who could provide expert advice remotely.

Now, when an AIS patient arrives out of hours, a cart is taken to their bedside by the base team, which sets up a video link to the consultant on call. By its tenth anniversary, the service had assessed 4,185 patients, of which 1,788 or 42.7 per cent have been thrombolysed.

Just 478 or 20 per cent of the patients who were not thrombolysed missed the critical 4.5 hour timeframe and, while door to needle time varies across the seven hospitals, the service has been able to achieve a DTN of just 46 minutes.

Clinical lead Raj Shekhar, who is also a consultant at The Queen Elizabeth Hospital Kings Lynn, says: “We are using video telemedicine to provide safe care in a good, clinically well-governed environment. We have always had telephone support for our junior colleagues, but this is very different.

“We have very clear video streaming. That is the particular benefit of this system; we can assess as if we were assessing at the bedside.

“We can talk through the computer to the patient, talk them through the assessment, explain what is happening, make sure there is informed decision making, and that they are kept in the loop.

“Or, we can talk to their next of kin or the clinical team. We can get confirmation of our assessment and see treatment being given. We also have software to create a report. Everything is written up and can be printed from the system, so there is a note for the patient record, and data for audit.

“Thanks to the ongoing training and education that we do with base clinical nursing and junior medical staff, each consultation is just 15 to 17 minutes long; so it is a very fast paced environment.

“However, we have been doing this for ten years now with no clinical or governance concerns, and that makes us very confident with this way of providing safe care in a timely fashion.” 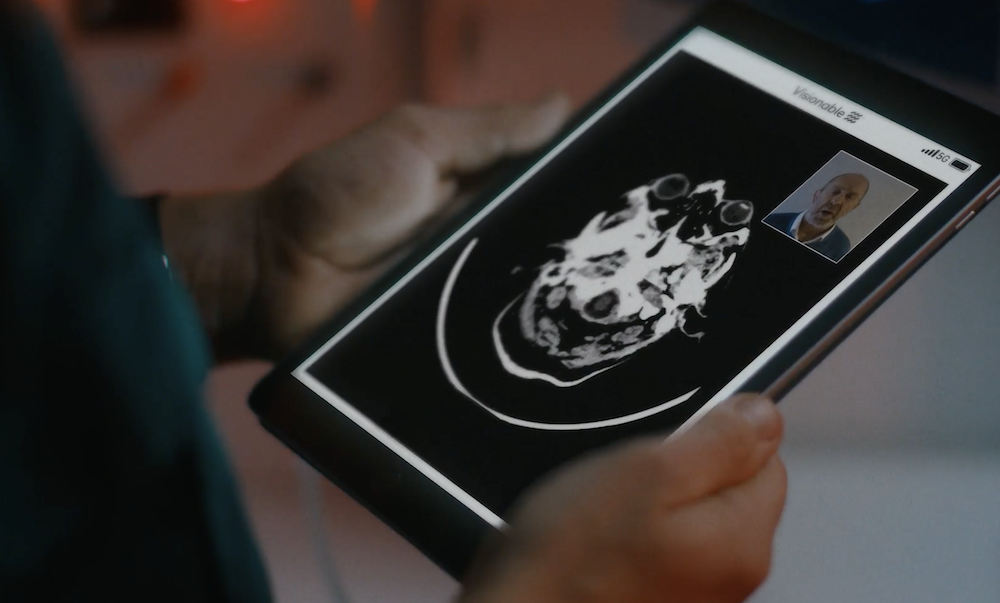 The partnership has learned lessons that NHS services new to remote working and teleconsultation may wish to consider.

Both Sibson and Shekhar say good admin and IT support is essential, to make sure that the rota is kept up to date, new consultants are ‘buddied’ with experienced colleagues, base teams have a single number to call when they need it, and there are no network or log-in issues.

They also stress the need to train junior doctors in how to spot stroke and when to refer to the service. This can be a challenge as they move through short rotations during their training.

Also they underline the need for good clinical champions, a role fulfilled in the East of England by the lead stroke nurse at each hospital; and to make sure that everybody involved is comfortable with their role and the technology.

Moving onto the wards; and into ambulances

The partnership is exploring new ideas for how it could extend its support for stroke services. Starting in early 2021 with Queen Elizabeth Hospital Kings Lynn, it is in the process of establishing a ‘virtual ward round’ for patients who have had a stroke but are at low risk and not suitable for thrombolysis.

The telemedicine carts used to deliver the thrombolysis service in emergency departments are too big to use easily on wards and present infection control challenges, so the service is experimenting with iPads and iPhones that enable clinicians to access Visionable’s platform through a browser.

Meanwhile, the partnership has been working with the East of England Ambulance Service NHS Trust on a project to assess whether people with stroke symptoms are suffering from a stroke or a ‘stroke mimic’ such as a migraine or a transient ischaemic attack (TIA).

TIAs are caused by a temporary disruption in the blood supply to the brain, and don’t require the same treatment, although they may be a ‘warning sign’ for stroke in the future.

A study established that around 40 per cent of the patients in the East of England being taken into hospital with stroke symptoms were experiencing a stroke mimic.

So, the partnership set up a trial to give ambulance teams an iPad with the Visionable app loaded on it that they could use to call a consultant for advice.

Although the study was a small one, all but one of the patients involved – who had a chest infection – was able to stay safe at home and then attend a TIA clinic if appropriate.

Sibson says: “The project went really well. The ambulance service thought it was a great idea and patients loved it. One of the things that it demonstrated is that telemedicine is not second-rate care, but another pathway into care that can be better for everybody involved.

“If stroke mimic patients are taken into hospital, then they can often spend hours in A&E, only to be sent home and then told to come back to a clinic for treatment. If they avoid doing that, it’s a better outcome for everybody.”

Setting a new standard for care

These initiatives have been given new urgency with the pandemic, which has highlighted the need to keep clinical staff and patients safe at home whenever possible, while still delivering timely care. But the East of England Telemedicine Stroke Partnership now has a lot of experience to draw on.

“Many telemedicine projects are run across a single trust, and that is relatively easy because you can use the hospital’s own systems and scans,” Shekhar says. “We are doing this across a big region and across hospitals that are using different systems.

“Also, we can see the patient and that is critical. The team around the patient is being led by the consultant, just as it would be if they were at the patient’s bedside.

“It is bringing expertise to the patient. And this is the norm now; this is the standard of care set for all our participating hospitals.”

It provides a consultant-led telemedicine service to assess stroke patients for thrombolysis 5pm to 8am Monday to Friday, plus weekends and bank holidays.

Despite door to needle and onset to needle times varying across the seven hospitals, this service has been able to achieve a median DTN of 46 minutes across all the hospitals in recent months.

A health economic review conducted by the University of East Anglia has shown that the service saves money by delivering better outcomes for patients.

Because patients who receive rapid, appropriate thrombolysis have shorter stays in hospital and are less likely to need further treatment, and the service delivers this more reliably than ‘usual care’, it estimated that it saves the NHS around £470,000 a year.

Five healthcare trends for 2021 forged in the turmoil of 2020

The future of nanoscale disease diagnostics?